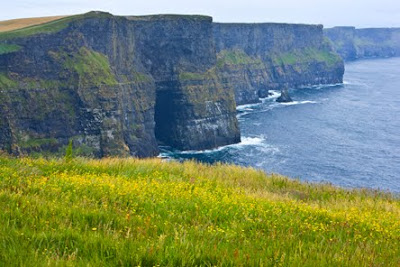 Today is a day when we all celebrate being Irish. Being of Irish ancestry (the McNulty clan) and having been to the Emerald Isle a few times, I can tell you there is much to celebrate: Here are some fun facts to ponder about our Irish brethren:

• The most common surname in Ireland is Murphy.
• The Celtic harp, not the shamrock, is the symbol of Ireland and can be found on the Irish Passport and the back of the 1 EU coin.
• The style of dance known as “River dance” was created when the British outlawed Celtic music and dance centuries ago, hence people learned to dance with little motion from the waist up so that it appeared from the outside of pub windows that nothing was going on.
• Bono (of U2 fame) is the only person who has been nominated for an Oscar, Grammy, Golden Globe and Nobel Peace Prize.
• Although Enya has never performed a live concert (other than the Academy Awards), she has sold over 70+ million albums.
• Like Switzerland, Ireland is a neutral country.
• The expressions, “Tying the knot” and “honeymoon” are original Irish expressions
• The Blarney Stone is actually part of a castle wall (the Blarney Castle). To kiss the stone, you have to climb to the top of the castle and lay on your back over the edge holding on to guard rails.
• The world “galore” comes from the Gaelic words “go leor” which means “plenty.”
The Irish don’t use the expression, “Top of the Morning.” This line was created by two screenwriters for a Bing Crosby movie of the same name.
Speaking of movies, the Cliffs of Moher, one of Ireland’s most popular tourist attractions, were filmed in The Princess Bride as the “Cliffs of Insanity.”

Stress Tip for the Day:
You can start by wearing something green today, but if you really want to practice stress management Celtic style, start by wearing a smile. The Irish pride themselves by not taking themselves too seriously (this comes from 800 years of British occupation where they nearly lost their religion, language, music and culture), and… they have a great sense of humor! Smile!

Links/Books/Movies Worth Noting:
Here are my top 10 Irish movie recommendations:
1. Waking Ned Divine
2. My Left Foot
3. The Secret of Roan Inis
4. Michael Collins
5. The Commitments 6. Ondine
7. Book of Kells
8. Into the West
9. In the Name of the Father
10. The Wind that Shakes the Barley
• Also, if you get a chance to see the PBS special, The High Kings, don’t miss it.

Quote for the Day:
“May your blessings outnumber the shamrocks that grow, and may trouble avoid you wherever you go.” — Irish Blessing

Photo for the Day:
There were a great many images to choose from, but the Cliffs of Moher are one of the top tourist sites in the country. So to honor Ireland (and the perennial favorite movie which has nothing to do with Ireland, The Princess Bride) here is a photo of the renowned Cliffs of Moher. Enjoy!